The Future of a Machine’s Condition Lies in Data

Prognostics help to avoid malfunctions and manage remaining useful life. Companies continue to be flooded with an ever-increasing and more complex amount of Big Data. Those who can draw crucial information from these masses of data can obtain a competitive advantage.

Problems can be recognised and underused potential utilised. The industry is offered totally new possibilities through the Internet of Things, especially when it comes to process optimisation and automation.

The way has been paved for profound changes to industrial processes by implementing modern information technologies. As a consequence of advanced digitalisation, machines are linked with one another and collected data is used to intelligently coordinate and improve processes. When it comes to maintenance and operational management, Big Data enables a data-based and future-oriented predictive strategy.

For example, thanks to innovative Big Data technologies, prognoses can be created on the future condition of a machine or the individual machine components. With the prognostic approach users receive a data-based prognosis and can adjust maintenance plans accordingly.

Further, unnecessary costs or unplanned outages can be avoided, for example by replacing parts in time, so not too early and not too late. In this context, Prognostics can be defined as being an objective and data-based forecast of future conditions with an explicit time reference. In practical terms this means that Prognostic Reports can provide information on the future condition of machines or machine components for a period of mostly weeks or months or, in special cases, even years. 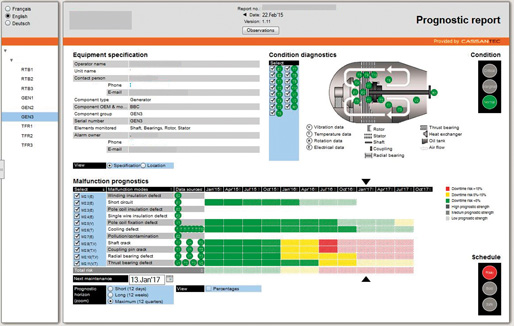 This image shows an illustrative excerpt from Cassantec’s Prognostic Report for one generator of the hydropower plant. The top right hand corner shows a sketch of the generator. The dots show the exact data reading points, at which data was collected. In this case the collected data is vibration, temperature, rotating and electrical data. The colour green represents a low risk of malfunction. If the malfunction risk would increase the colour of the respective component would turn yellow or red. The lower element shows the prognosis in detail. A forecast horizon of 12 quarters has been chosen. The risk categories (malfunction risk 15% = red) were determined by the Swiss energy provider, and can be adjusted to respective risk tolerances.

Because the prognoses are calculated for each machine individually, they are not based on average data from other machines or manufacturer specifications. This has the advantage that the individual performance curves, the operational strategy and if necessary, previous data on historical incidents can be included in the prognoses.

This results in the prognoses reaching a higher level of precision and reliability. When calculating the prognoses, the historical data runs through a number of different steps. These consist of stochastic methods and include highly developed algorithms. The result is an explicit risk profile that illustrates the probability of malfunctions over time.

The requirement for a prognosis is to collect and store enough process data (like rotation frequency, speed, temperature and pressure) and condition data (examples: vibration data, lubrication data and housing temperature).

An ideal time-frame is three to five years, whereby it is possible to complete a reliable prognosis with a shorter time-frame. The storage format does not play an important role. It is more important to ensure that the data is as complete as it can be, as this will increase the validity of the statistics.

Instead of relying on fixed maintenance intervals or waiting for something to break, the information from the Prognostic Report can be used to ensure that maintenance and repair work can be carried out when they are needed. Parts will not be replaced too early on speculation, but rather when it is necessary from a technical point of view.

Apart from this, by means of the Prognostic Reports and the good data processing it is also possible to recognise the effect various operational scenarios will have on the Remaining Useful Life (RUL), transparently and objectively. By doing so, the operation can be adjusted so that the RUL can be actively managed.

Pilot Project in a Hydropower Plant

Introducing transparency into the RUL and ideally being able to actively control it, were the aims of the Cassantec Prognostic solution, when implemented as part of a pilot project in a hydropower plant of a large Swiss energy provider. The active management of the RUL should take place in such a way that the maintenance activities can be optimised, in order to be able to lower the operational and repair costs. The Swiss energy provider also expected that the operational strategy of the plant could be altered, in order to optimise the operation during the RUL and the planning for the purchase of spare parts.

In order to be able to achieve this, the Swiss company contracted Cassantec. First of all the historical temperature and vibration records as well as the process data from the power plant were collected and processed. During the second phase, the power plant experts and Cassantec ascertained the correlations between data parameters and specific malfunctions.

Then the last phase was prepared based on this foundation – the calculation and prognoses of the risk of malfunctions. This phase also included the fine-tuning of the preliminary component specific warning and alarm levels.

The first Prognostic Reports compiled for the power plant already delivered valuable findings. The prognosis for one of the three generators revealed that a considerable rise in the vibration pattern meant that the RUL was too short. This endangered the asset strategy of the operator.

By implementing a scenario analysis, which determined the dependence of the vibration data on the operational regime, it was possible to find a new mode of operation for the generator. This had a positive effect on the RUL of the generator, the need for maintenance and its reliability.

Based on results produced by the Prognostic solution, the Swiss energy provider received valuable insight into the relationship between operational strategy and the RUL of the power plant and in particular the critical generator. This goes much further than the information they were previously able to generate with conventional condition monitoring and diagnosis.

The results enabled the Swiss energy provider to make well-founded decisions on the adjustment of its operation and maintenance plan for the generator, in order to be able to optimise the usage of the machine in three fundamental aspects:

- Considerable extension of the RUL

- Specific information on when a component will need to be replaced

As a result, the Swiss energy provider decided to expand the implementation of the prognostic solution to another three hydropower plants. The operator expects extensive savings in maintenance and repairs and a comprehensive understanding of the condition of the machinery and of the factors that influence the RUL.

With the help of a data-based Prognostic technology, the future condition of machines can be determined. This creates the foundation for intelligent maintenance planning. Instead of fixed intervals, maintenance will now only take place when it is technically necessary. The implementation in the Swiss hydropower plant shows that the transparency and foresight derived from Prognostics has enabled an active control and expansion of the RUL. 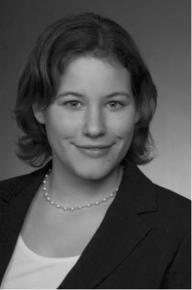 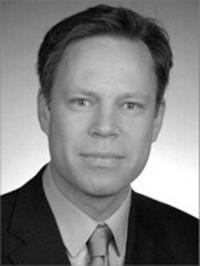 Julia Heggemann has been with Cassantec since 2014. Marketing and communication are part of the areas she is responsible for. Ms. Heggemann has a Master of Science in International Business from the University of Maastricht, the Netherlands.

Moritz von Plate has been the CEO of Cassantec, a company specialised in Prognostics for industrial facilities, since 2013. Before joining Cassantec, Mr. von Plate was the CFO at Solarlite, an EPC Contractor for concentrated solar power plants. Before this he worked for seven years at the Boston Consulting Group, focusing on industrial goods and financial services industries. Moritz von Plate has an MBA from Georgetown University, USA, and is an agricultural engineer. 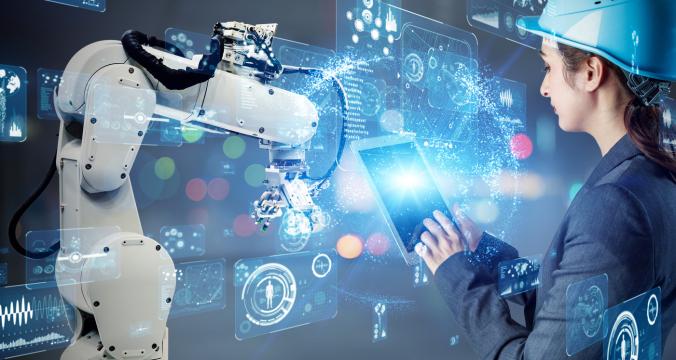 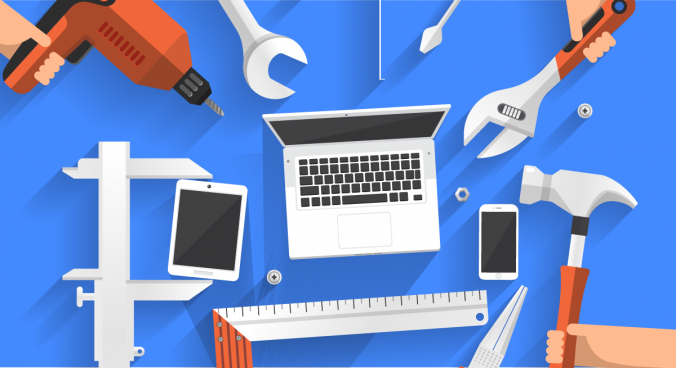