Maintaining the Delicate Balance of a Lubricating Film

The main purpose of lubrication is to separate surfaces.

Many components of machines that daily affect us operate on a thin film of lubricant. Wherever two or more solid surfaces are in contact with relative motion between the surfaces, tribology is involved. Therefore tribology, or the study of rubbing including the fields of friction, lubrication and wear, has become the basis for selecting lubricants.

The main purpose of lubrication is to separate surfaces in relative motion by a material that has a low resistance to shear known as the lubricant. Depending on the type of intervening film and its thickness, a number of lubrication regimes can be identified and are well-known as the Stribeck-curve.

The Stribeck-curve takes the form of the coefficient of friction (COF) as a function of the lubricants viscosity (Z), velocity (N), and load (P) parameter Z*N/P. The different lubrication regimes are identified as: boundary lubrication (A), mixed-film (B), elasto-hydrodynamic or EHL (C) and full-hydrodynamic (D). 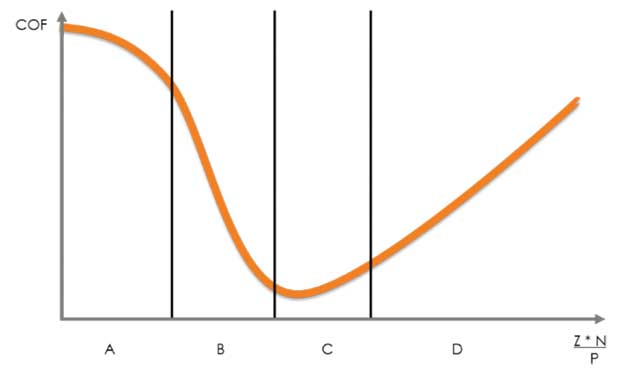 The Stribeck-curve takes the form of the coefficient of friction (COF) as a function of the lubricants viscosity (Z), velocity (N), and load (P) parameter Z*N/P. The different lubrication regimes are identified as: boundary lubrication (A), mixed-film (B), elasto-hydrodynamic or EHL (C) and full-hydrodynamic (D).

At full-hydrodynamic lubrication the surfaces are separated by a thick lubricating film and wear is insignificant. There is no large effect on the lubricant’s pressure-distribution, and friction is determined by the rheology of the lubricant.

When loads become high enough on nonconforming geometries to cause plastic deformation of the surfaces and pressure-viscosity effects of the lubricant, elasto-hydrodynamic lubrication is identified.

As the film thickness gets thinner asperity interactions and fluid film effects take place, increasing friction. This mechanism is referred to as mixed-film lubrication.

Boundary lubrication is characterized by low Z*N/P values. Predominantly solid body contact occurs at which the intense pressures and temperatures make the chemistry of the lubricant surface interaction important, better known as the formation of tribo-mechanical reactions, and highly complex. Mostly different types of wear appear side by side: adhesion, abrasion, surface fatigue and chemical wear.

Having refreshed the theory of lubrication, engineers use this knowledge as a pivotal starting point to determine the correct use of the lubricant and the equipment it lubricates. Load (P) and velocity (N) are in most applications steady or at least controllable. That leaves viscosity (Z) to be the most important parameter for determining the lubrication function since it directly affects the thickness of the lubricant layer and the energy dissipation along surfaces in relative motion.

Although a lubricant’s viscosity is subjected to limits in terms of function, there are many influences that play a role when it comes to maintaining a lubricants viscosity. Amongst them are temperature, cleanliness, contamination, oxidation, thermal degradation, hydrolysis, additive depletion and many others.

Viscosity is one of the compulsory tests for routine in-service oil analysis. Any significant change detected in the measured viscosity requires prompt action and could be indicative of severe degradation of oil, cross contamination, water ingression or other factors that can be confirmed by measuring other parameters.

Contamination includes all foreign and unwanted forms of matter and energy, including particles, moisture, heat, air, chemicals and radiation.

As studies reveal that 82 percent of machine wear is induced by particulate contamination, setting cleanliness targets rated according to ISO 4406:1999 is the first step to start with clean lubricants, reliable machinery and efficient operations. The most common method for dealing with particulate contamination is obviously filtration. Lubricants can be circulated through filters to achieve the required cleanliness level.

However, companies who have developed a premium lubrication programme address the source of contamination. There are easily as many sources of unwanted particles as there are types.

Contamination avoidance is achievable by implementing a simple housekeeping programme designed to keep equipment clean of dirt and shielded from water or moisture; proper storage, handling and dedicated transfer and delivery equipment for each lubricant type, clear labelling to eliminate dirt contamination and lubricant cross-contamination handled by a workforce trained and educated in lubrication technology.

Besides contamination control, companies with premium lubrication programmes monitor the condition or chemistry changes of lubricants by means of oil analysis, to optimize the lubricants performance and maximize equipment availability or lifetime.

Not all degradation is unavoidable. Detecting the right degradation mechanism and preventing it can alleviate unplanned downtime, machinery failures and significant maintenance and operational costs. It is extremely important to find the root cause of oil viscosity change and to act accordingly at the earliest possible time to minimize the damage.