Job-related stress is a concern for the large majority of the European workforce, concludes the 2nd European Opinion Poll on Occupational Safety and Health. The survey conducted by Ipsos MORI on behalf of the European Agency for Safety and Health at Work (EU-OSHA), measured the opinions of over 35,000 members of the general public in 36 European countries on contemporary workplace issues including job-related stress and the importance of occupational safety and health for economic competitiveness and in the context of longer working lives.

Eight out of ten of the working population across Europe think that the number of people suffering from jobrelated stress over the next five years will increase (80 %), with as many as 52 % expecting this to ‘increase a lot’. This echoes the findings of EU-OSHA’s ESENER survey on new and emerging workplace risks which found that 79 % of managers think that stress is an issue in their companies, making stress at work as important as workplace accidents for companies.

Work-related stress is one of the biggest health and safety challenges faced in Europe, representing a huge cost in terms of human distress and economic performance. The poll additionally found that the large majority of Europeans (86 %) agree that following good occupational safety and health practices is necessary for a country’s economic competitiveness, with 56 % strongly agreeing. Views are similar among workers and those who do not work (86 % and 85 % agree respectively).

“The financial crisis and the changing world of work is making increased demands on workers, therefore it is not surprising that work-related stress is at the forefront of people’s minds,” says Dr Christa Sedlatschek, Director of EU-OSHA. “Regardless of age, gender and organization size an overwhelming majority of people believe that work-related stress will rise. Nonetheless there are interesting national variations in those who expect job-related stress to ‘increase a lot’, for instance with Norwegians least worried (16 %) and Greeks most worried about rising stress (83 % ‘increase a lot’). Tackling psychosocial risks is a major focus of EUOSHA’s work to improve the lives of workers across Europe.” 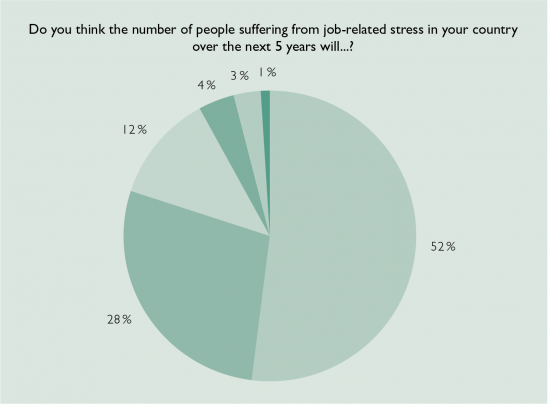 Finally, in the European Year for Active Ageing and Solidarity between Generations, the poll found that 87 % of the general public across Europe believe that good occupational health and safety practices are important to help people work longer before they retire (including 56 % who say they are ‘very important’). A recent Eurobarometer survey shows that many Europeans are ready for active ageing but their current occupational safety and health conditions might not allow them to continue working to an older age. Although the typical pensionable age is 65 years across Europe, the average exit age from the labor force in 2009 was about 61.5 years according to Eurostat. In the Eurobarometer survey, four out of ten (42 %) Europeans believe that they will be capable of doing the work they are currently doing until the age of 65 or beyond, while 17 % expect that they will not be able to carry on in their current job past the age of 59. EUOSHA is actively involved in the promotion of the European Year for Active Ageing 2012 to reinforce the need for good occupational safety and health at all stages of working life.

The full results of the pan-European poll can be found in http://osha.europa.eu/en/ safety-health-in-figures.

»»The European Agency for Safety and Health at Work (EU-OSHA) contributes to making Europe a safer, healthier and more productive place to work. The Agency researches, develops, and distributes reliable, balanced, and impartial safety and health information and organizes pan-European awareness raising campaigns. Set up by the European Union in 1996 and based in Bilbao, Spain, the Agency brings together representatives from the European Commission, Member State governments, employers’ and workers’ organizations, as well as leading experts in each of the EU-27 Member States and beyond.