Lack of Qualified Technicians and the Role of Planning and Scheduling

After almost 20 years of focusing on how to increase equipment reliability, a paradigm shift seems to be taking place.

The behaviour of all relevant equipment has been identified and documented, reliability engineers have been appointed, work groups are studying failure root cause analyses and related improvements and sustainable reliability awareness is embedded in most organisations. In brief: the demand for maintenance has been reduced to its essential components and responsibility for reliability is placed in the trusted hands of a companies own employees.

Now, we see renewed attention for the efficient execution of the maintenance tasks that remain. This attention is particularly directed towards reducing time losses on the part of technicians (increasing so-called hands-on-tools time, or HoTT) and is caused by, amongst other things, an increasing lack of qualified technical personnel.

How efficiently maintenance work is carried out in turn affects two important factors: on the one hand, the availability of the production assets, and on the other the utilisation of scarce technical competencies. Planners, the ultimate organisers of maintenance work, need to be aware of the fact that their added value consists in the optimisation of both these factors. The abovementioned paradigm shift (from operational reliability to maintainability and labour productivity) will make sure that the importance of the planning function is increasing.

Maintainability and the Formula One Pit Stop

Anyone who has ever watched a Formula One race knows how quickly the cars are refuelled or given a tyre change. The speed with which this is done can mean the difference between winning or losing the race, it is all about the car’s availability but hardly at all about operational reliability. The pit stop is an excellent and virtually universally understandable example of the other aspect of availability – maintainability.

Formula One cars and their equipment are designed to ensure safe and efficient pit stop interventions. The organisation of tasks is also standardised down to a 1/1000 of a second, with those involved being specially trained to conserve as much precious time as possible. In addition, logistics are organised down to the last detail: technicians never need to reflect during their work about the content of a given task and consequentially there is no need to search for the right parts or tools. In the field of maintenance the pit stop is a popular metaphor as it ideally sums up the goal toward which our work should be organised. Obviously, in practice the matter is somewhat less clear-cut. 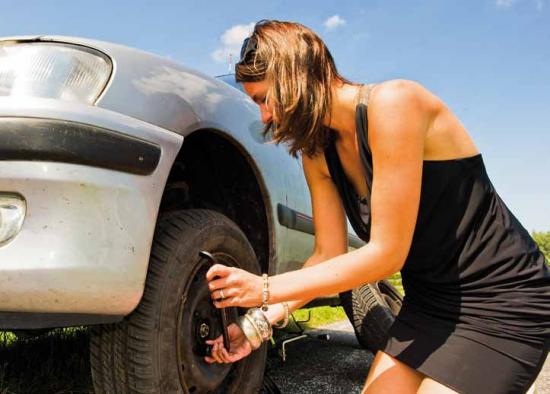 “Imagine that you get a flat tyre when driving on a motorway and go about changing the tyre yourself. Describe first what has to be done exactly, and then the entire method to be employed so precisely that some one who has never changed a tyre before will be able to execute the task successfully.”

Almost everybody who does this exercise will fail to think upfront and critically about the correctness with which the assignment itself is formulated – which is in fact the first requirement of the exercise. When the results are discussed, it turns out that none of the participants has changed the tyre. They all replace the flat tyre by removing the wheel with the flat and replacing it with a spare wheel with a good tyre.

Changing the tyre (as is stated in the assignment, or in maintenance terms: the notification) requires totally different tools and methods than just changing the wheel with a spare one. Obvious isn’t it? Not according to the respondents (of course with the benefit of hindsight). They mention example after example of how this problem has presented itself at their organisations.

The result: the problem itself is not solved. Or a technician discovers it in the course of his/ her work and sees that he does not have (all) the requisite materials/ tools for doing the job, resulting in a substantial loss of time and excessive loss of asset availability. 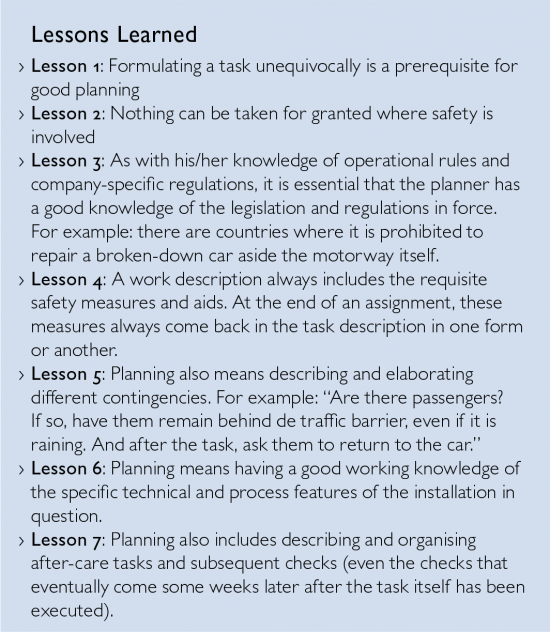 The participants in the NVDO training course all begin their method descriptions with the required safety measures. Elementary things like moving the car to a safe spot on the shoulder, turning off the ignition, turning on the emergency lights, putting on a safety vest and placing a safety triangle on the road - none of these are forgotten. But only a small percentage think of having any passengers remain safely behind the traffic barrier. It is in turn remarkable that, after replacing the wheel, nearly half of the participants drive away with their safety vest and the emergency lights still on, with the safety triangle still on the road and, for that matter, the passengers still standing behind the traffic barrier. Dumb? Not according to the participants, something borne out by the examples they mention in the ensuing discussion: tools left at installations, work locations that are not tidied up, and worse yet: unsafe working conditions.

It should be feasible to draw up detailed and accurate descriptions of all of the relevant technical tasks so that part should be unproblematic – or at least one would think so. However with a bit of “egging on”, additional items related to specific circumstances also come to mind. For example, indicating the spot where the jack must be placed or where the spare wheel and tools are located (prevents the loss of valuable time as well as wasteful and potentially dangerous idle times), or indicating that a wheel is protected from theft by means of a wheel-nut lock which requires a special tool.

On average, 65 % of participants forget to mention the requisite after-care in their task descriptions like having the spare tyre pressure checked at the earliest convenient opportunity, and remarkably many of the participants keep on driving with a flat spare tyre in the boot. In practice drivers become aware of this sooner or later, but in maintenance practice, where technicians often need to hurry on to the next job, there is a substantial probability that it will be unclear what to do with the removed parts, or that a requisite check of proper functioning is not carried out – not even at a later date.

We teach (future) planners that there are various ways to prepare and describe work. Standardisation of methods as described in the above exercise is only one of these. But it is indeed the type of planning that places the greatest demands on planners, requiring in-depth knowledge of the work, the relevant asset(s) and local conditions, as well as a substantial investment in time to describe all relevant details – in the proper order – and to include all requisite safety measures, documentation, materials and tools. We also teach them to play the ‘film’ of the work in their minds.

Experience and accuracy are essential in this connection. It will come as no surprise that after a bit of training the most experienced professional technicians make the best planners. The trainees learn that preparing work by standardisation of methods is an absolute requirement where the professionalism of those carrying out a certain task in a given situation is not absolutely guaranteed. Through the increasing shortage of qualified professionals, the need for this form of preparation could increase dramatically in the near future and a need for more and better planners is the result.

The above-described exercise is also used to demonstrate how planning is more than just pleasing the system by producing work orders with administrative data only. If not taken seriously, it can result in work orders with incorrect details under the motto ‘the professional will always know what has to be done anyway.’ This motto usually applies but can also lead to time losses for technicians and substantial production down-times, and then one might as well give up competing for the ‘World-Class Maintenance Cup’ from the outset.

Planning & scheduling is about preventing time losses during jobs and between jobs with the objective of making production down-times as short as possible and optimising the use of valuable professional capacities. By organising work in advance, a planner can have much more influence on equipment down-times and the efficient utilisation of technicians’ working hours than even their supervisors. Planning is a rare speciality, a bit more respect and (financial) appreciation for professional planners now and especially in the future, would do no harm at all!