The Competitive environment in Oil & Gas motivates drilling operations to continuously
focus on increasing safety and cost effectiveness. To ensure this, optimal reliability and appropriate
maintenance of rig equipment is a must. Optimized maintenance plays a key role in balancing the
maintenance parameters (legislative, economic and technical) and the available resources to carry
out the maintenance programme. Effective implementation of maintenance optimization leads to
improved system availability, reduces overall maintenance cost, further improves equipment
reliability and elevates system safety.

Maersk Drilling has been reporting failure and maintenance data in its CMMS for more than 10 years. The main purpose of the collection of maintenance history is to analyze failure causes and lessons learned from the past. To coincide with this, the Maintenance Analysis & Optimization Group is continuously focusing on expanding current best maintenance practices by shifting from “Qualitative” to “Quantitative” decision- making. To achieve this, Maersk Drilling has started to build up competencies for utilizing condition based maintenance, reliability based maintenance, maintenance optimization etc. As a result, various types of Decision Support System (DSS) and tools have been developed to support this change. 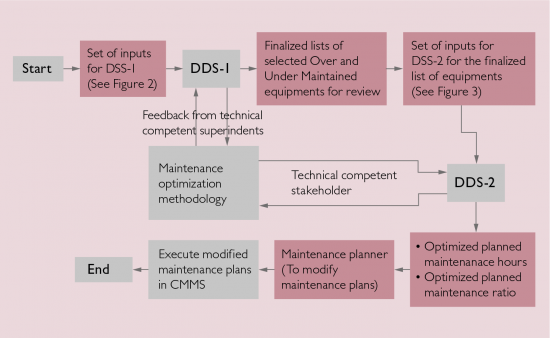 A decision support system (DSS) is a computer- based information system that supports business or organizational decision-making activities. DSS serves the management, operations, and planning levels of an organization and helps to make decisions that may be rapidly changing and not easily specified in advance [1]. To tackle the challenge of optimizing planned maintenance hours, Maersk Drilling recently developed two spreadsheet based DSS’s [2] for maintenance optimization. The first (DSS-1) identifies over and under maintained equipment from a pool of thousands of pieces of equipment originating from Maersk Drilling’s current fleet of 17 drilling rigs. The second (DSS-2) uses maintenance history, failures, downtime hours and cost data as inputs, and delivers optimized planned maintenance hours plus an optimized planned vs unplanned maintenance ratio at lowest total cost as outputs.

Safety is always a prime concern at Maersk Drilling, therefore the proposed methodology considers cost effective maintenance optimization under safe operations. Inputs from various internal competent engineers and legislative requirements are taken into consideration in the process of optimization.

Every model is only an approximation and is only shadows of reality [3]. The outcomes of the proposed models are therefore considered to move forward in the right direction for significant improvement. Based on practical constraints and reality, the following limitations are considered:

The mathematical model and methodology have been developed and customized based on available data in the company’s maintenance system. An optimization approach [4, 5, 6] of minimizing total cost (planned and unplanned maintenance costs including downtime cost) was adopted as a basis for the optimization model. The methodology starts with grouping the equipment in to high and low critical categories and further calculates relative weights of four critical categories (Safety, Environment, Production and Cost as per Maersk Drilling’s criticality definition) by using the pair wise comparison method [7]. The identified relative weight of each criticality category is used to combine all four criticalities into one number, this is given the name Criticality Index. The Criticality Index is later used to identify the equipment targeted first for maintenance optimization. The proposed mathematical model identifies optimum planned vs. unplanned maintenance ratio and planned maintenance hours per year for the targeted equipment at lowest total cost. Figure 1 briefly describes the overall methodology and interrelations between inputs and outputs of the developed DSSs.

The main challenge facing optimization was to identify equipment to be targeted for optimization, and how to set the criteria on maintenance hours for identifying equipment and organising it in over and under maintenance categories.

A mathematical model for total cost (planned, unplanned and downtime cost) has also been developed. The cost model optimizes planned maintenance hours at lowest possible cost of the system/equipment. The mathematical model will be submitted in a peer-reviewed international journal.

A case study has been carried out at one of the rigs in Maersk’s Drilling fleet. Maintenance activities and cost were collected from 2009 to 2012. Model inputs, outputs, analyses and methodologies are briefly described in the following sections. 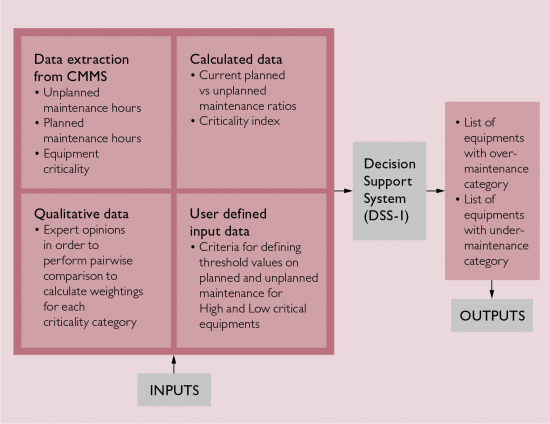 Figure 2. Decision Support System (DSS-1) for identifying over and under maintained equipment. 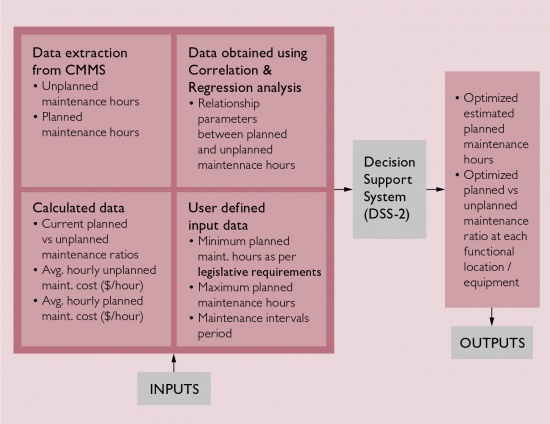 Identifying over and under maintained equipment

After identifying the targeted equipment for maintenance review, the next step is to optimize the ratio between planned and unplanned maintenance. To demonstrate the outcomes of the optimization model, two systems (Draw work system and Drilling control system) from one rig in Maersk’s drilling fleet has been chosen as an example (Table 3).

Table 2. Output from DSS-1 grouped as over and under maintained equipment

The methodology has been identified as a potential tool for maintenance management to determine the most relevant equipment section for improvement and provides a scientific procedure and guideline for moving towards safe and cost effective maintenance optimization. Significant monetary benefits are expected by reducing breakdowns, as well as unnecessary planned maintenance with higher safety.

Based on the outcomes from the case study on one of the Maersk’s Drilling rigs, optimized maintenance on specific systems shows an estimated reduction of 15–20 % in maintenance costs and 10–15 % in downtime.