Leaks can form practically anywhere in a plant. Detecting and repairing these leaks is extremely important in any industrial facility. Some gases, when leaking, can present a serious safety hazard, especially flammable gases. Ultrasound technology is one of the best tools available to detect even very small leaks. We will explain in this article how Ultrasound can be used to detect gas leaks and avoid safety issues. 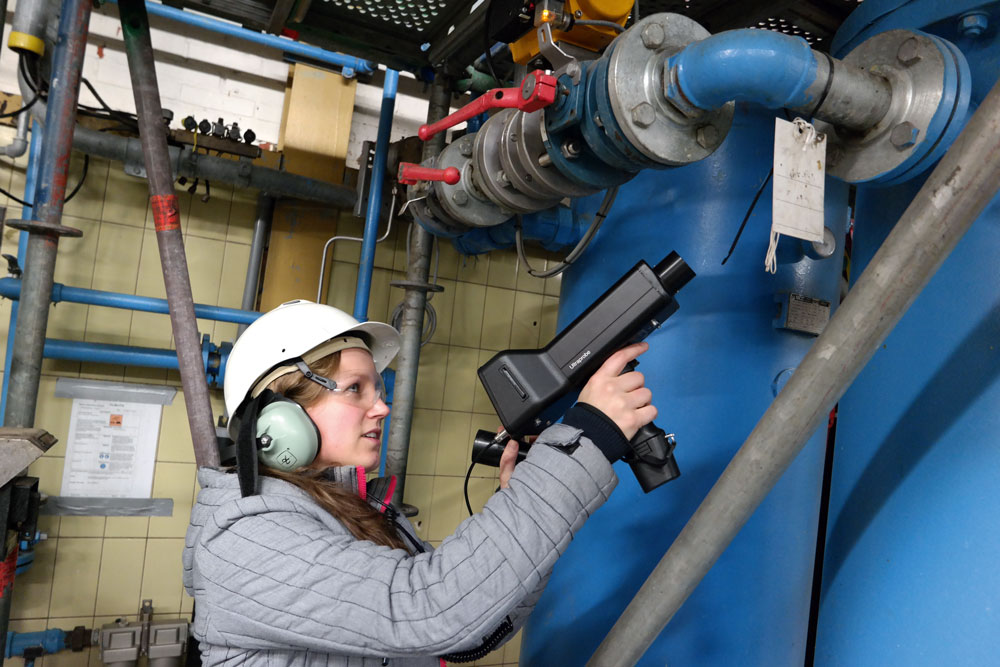 Industrial gases are critical for the operation of many industries, but at the same time they represent safety hazards, whether it is for their toxicity (carbon monoxide, for example) or for their flammability (natural gas, hydrogen). Having procedures in place to detect leaks of these gases is fundamental to ensure the safety of a plant and its personnel.
Even though there are many different methods to detect leaks like tracer gas detectors, or using soap, ultrasound technology is one of the most safe and efficient ways of finding those leaks and avoiding potential disasters.

How does Ultrasound for leak detection works?

Leakage occurs when a material can move from one medium to another. In a pressure or a vacuum leak, the fluid (liquid or gas) moves from the high-pressure side through the leak orifice to the low-pressure side. When it enters the low-pressure point, a turbulent flow is produced. Turbulence disturbs the air molecules producing white noise, which contains both low- and high-frequency components. In most plant environments this noise can be masked by surrounding sounds. The audible component, being a larger waveform, can appear omnidirectional, which makes locating and identifying a leak source difficult.
The ultrasonic component has attributes that make leak detection much easier. As a shortwave, weak signal, the amplitude falls off rapidly from the source. It also is a longitudinal waveform and is considered relatively directional. Since ultrasonic sensors do not detect the lower-frequency components, locating and identifying a leak can be very effective, even in noisy plant environments.

What affects the detectability of a leak?

There are several factors that make a leak detectable using ultrasound.

There are two types of viscous flow: turbulent and laminar. Laminar flow can be defined as: ‘Fluid flow in which the fluid travels smoothly or in regular paths. The velocity, pressure and other flow properties at each point in the fluid remain constant’.
Turbulent flow is defined as: ‘A fluid flow in which the velocity at a given point varies erratically in magnitude and direction’.
Ultrasound will therefore not detect laminar flow (as found, for example, in air conditioning diffusers) but will detect turbulent flow. Most leak situations will produce a turbulent flow. However, there are other variables that must be taken into consideration to determine if there is enough turbulence to produce ‘detectable’ ultrasound for a leak to be found.

The viscosity of a fluid is its resistance to flow, a measure of the fluid’s internal friction. For example, if we compare the viscosity of water to steam, water has a higher resistance to flow. The factors that influence flow through leak sites are the viscosity of the fluid, the pressure difference causing the flow and the length and cross-section of the leak path. For example, at the same pressure, air will leak through a leak site significantly more than a fluid such as water or oil. This is important to understand should you be presented with a leak in which the fluid has a high viscosity but not enough pressure to produce a turbulent leak. For example, when presented with a water leak underground, changing the fluid to a gas will greatly assist in locating the leak.

5 Distance from the leak

Accessibility to the leak

Due to the shortwave nature of ultrasound, the amplitude of the emission drops exponentially as the sound travels from the source. Distance of detection becomes a factor. If an inspector cannot get within detection distance of a leak, it will be hard to find it. It is important that the leak is accessible. Providing it is safe, the closer an inspector can get to the leak the better the chances are of detecting and evaluating it. If a leak is buried behind several structures, it will have a tendency to reflect off the various structures. The ultrasound from the leak is then sent off in other directions, bouncing from one object to another and consequently confusing the inspector as to where the source of the leak is. In some cases, ultrasound may be hitting material that absorbs the sound waves. The further the leak has to travel, the more likely the leak is to attenuate and weaken. Get closer to the leak source, remove interfering objects and use aids to gain access to the leak, such as a contact probe for structure-borne sounds found in enclosed cabinets, a parabolic microphone or flexible probes.
If a leak occurs in a confined space, be sure to follow all safety procedures. These are very hazardous conditions, and any mistake can be fatal. 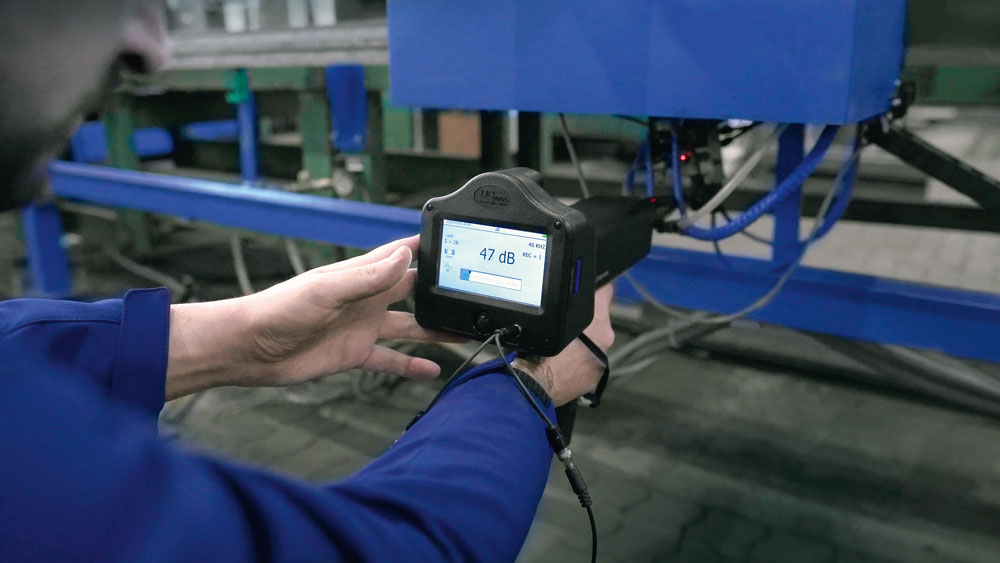 Specialised modules may be called for, such as a parabolic microphone for long-distance scanning, a close-focus module for close-up scanning or flexible probes for hard-to-access scanning.

The preferred method for locating a leak is called ‘gross to fine’. This is used to pinpoint and identify the location of leaks. Start at maximum sensitivity and scan by moving the probe around in all directions to locate a leak sound. This will be heard as a ‘rushing’ noise. Follow the sound to the loudest point. As you move, the leak noise might increase, making it difficult to identify the direction of the leak. Reduce the sensitivity as you move closer to the area and listen for the loudest leak signal. Scan all around the suspected leak area. Whenever it is difficult to determine the direction of the leak sound, adjust the sensitivity up if the sound level is too low or down if the sound level is too high. It is possible to pinpoint the exact site of the leak if you scan completely around the area of interest. Once near the site, place the rubber focusing probe over the scanning module and continue to move in the direction of the leak. To confirm, if possible, press the tip of the probe over the suspected site. If the leak sound continues or increases in volume, you have found the leak; if the sound level drops, continue looking. 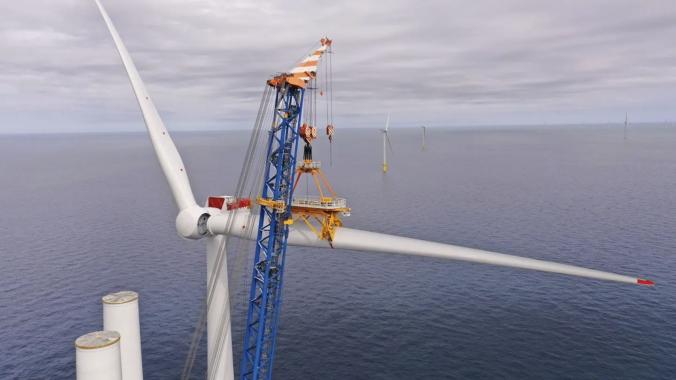 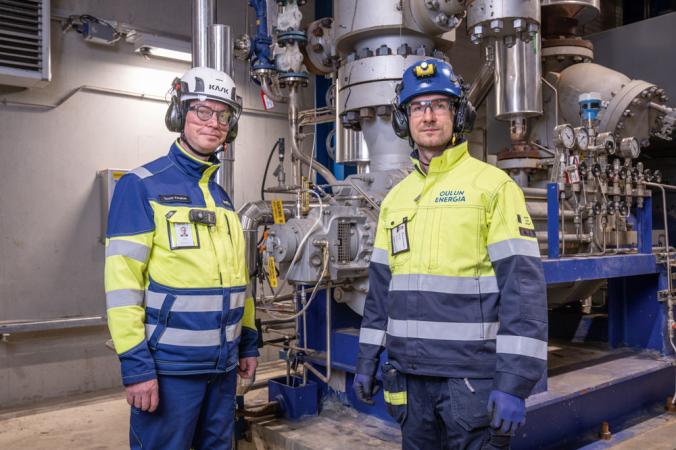