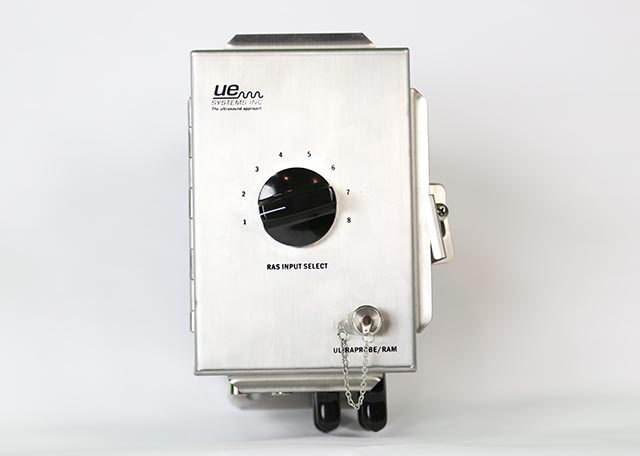 8 channel switch box – an inspector can quickly monitor up to 8 testing points.

Why Remote Monitoring with Ultrasound?

Remote monitoring with vibration analysis and temperature has been available for many years. For ultrasound, it’s a fairly new addition to the technology’s repertoire of capabilities.

Ultrasound is a proven technology that can detect certain mechanical and electrical faults much sooner than other technologies. By sensing subtle changes in ultrasonic amplitude, ultrasound is adept at finding early stage premature bearing faults. This is demonstrated by the I-P-F Curve. 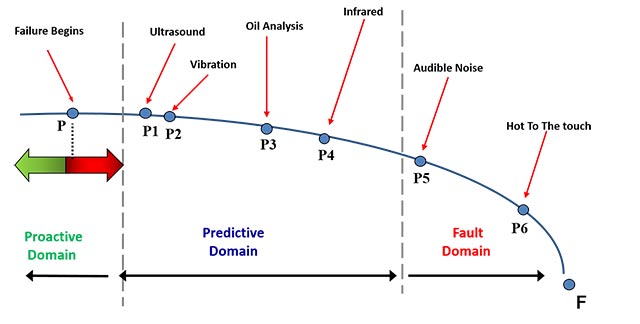 I-P-F Curve showing ultrasound as an early indicator of a potential problem in bearings and rotating equipment.

When a bearing lacks lubrication, there is an increase in friction. The higher friction also increases how much ultrasonic noise the bearing produces, indicated by a rise in the decibel (dB) level. While greasing a bearing that needs lubrication, one should see a gradual decrease in the dB level. Once the dB level has fallen back to a normal or baseline level, greasing can be ceased. If the bearing already has a sufficient amount of grease when greasing, then the dB level will slowly begin to rise as more grease is applied. That’s because over-lubrication also increases friction in the bearing housing, thus producing a higher dB level.

In the P-F interval once a failure has begun, ultrasound is excellent at finding it. These are bearing failures that can be detected even before changes in vibration. If you are monitoring critical assets, ultrasound and vibration should be used together in an effort to potentially detect multiple failure modes that may be missed when only using one technology alone.

UE Systems RAS – Remote Access Sensor – can be permanently attached to a hard-to-reach bearing and connected to a switch box for easy inspection.

Remote monitoring of bearings and other rotating equipment with ultrasound can be done in one of two ways: 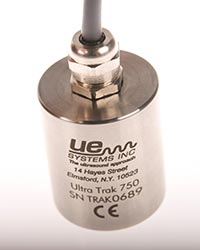 Remote monitoring with ultrasound can also be done continuously. For continuous monitoring with ultrasound, UE Systems offers a sensor called the Ultra-Trak 750. This is another stud-mounted sensor, but instead of connecting directly to a hand-held ultrasound instrument, this sensor has a 4-20mA output that allows for easy connection to existing plant process monitoring systems. An audio output also allows for sound recording for further diagnostics or comparing baseline sound files to alarm level sound files. Ideal applications for this sensor could include: high-pressure safety relief valves, robotic applications, early warning of failure for a mechanical asset, flow disruption, and prompting a lubrication PM.

Traditionally, inspection of energized electrical equipment has been performed using noncontact infrared cameras. However, in recent years, ultrasound has been added to these inspections for various reasons. One of the main reasons has been for safety: An ultrasound inspection of electrical equipment can be done without the need to open the energized cabinet or enclosure. The high frequency sound produced by corona, tracking, and arcing from inside of the enclosure will exit through any of the openings. The inspector will hear the sound via the headset, and know that an anomaly is present. The sound can then be recorded to determine if the condition is corona, tracking, arcing, or some type of mechanical looseness.

Corona, by nature, does not produce significant heat that would be detected by an infrared camera. However, it does produce high frequency sound that can be detected by the ultrasound instrument. If corona discharge continues to occur, it can lead to a more severe problem such as tracking or arcing. 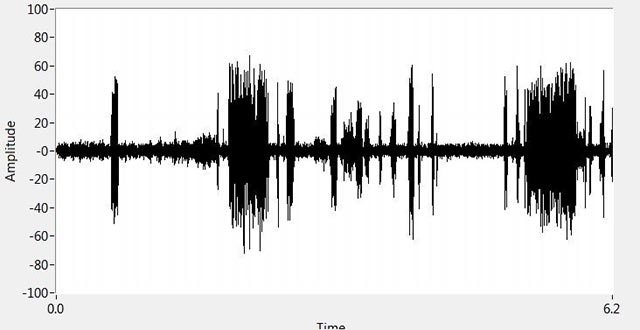 Arcing as seen in the Time Wave Form view.

When the sound file of corona is recorded, there are signature characteristics visible in the FFT and Time Wave Form (TWF) that will help to diagnose the condition. For corona, the discharge points only occur at the highest voltage point on the sine wave. This means that the amplitude peaks in the TWF are somewhat equally spaced as the discharges are only at the positive peak of the sine wave. The result will be well-defined 60Hz or 50Hz harmonics.

For tracking and arcing there are also certain characteristics to look for. With tracking, the discharge does not have to take place at the peak of the waveform. Instead, it can happen anywhere on the positive portion of the cycle. The spacing of the peaks in the TWF would be similar, but not uniform. As tracking becomes more severe, there are more discharge events and therefore more non-uniformly spaced narrow peaks. 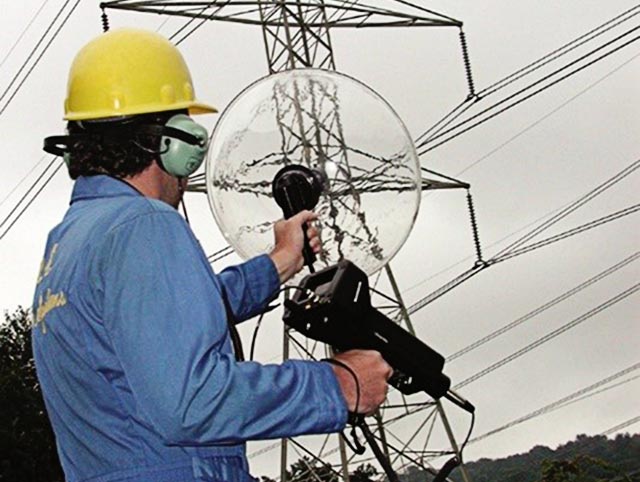 Arcing has the most non-uniform “look” in the FFT and TWF. Only the bursts of the discharge can be heard and these will be seen as wide peaks in the TWF view.

To inspect electrical equipment that can’t be easily reachable, one can attach a parabolic disc to an Ultrasound instrument and increase the detection range by 4 times, making it possible to detect electrical failures at a distance of approximately 50 meters.

Remote monitoring with ultrasound is a viable option for maintenance and reliability programs that are already monitoring assets traditionally with hand-held devices, and for programs where ultrasound is currently not a technology that is being used. Because it is very complimentary to vibration analysis for mechanical inspection and infrared thermography for electrical inspection, ultrasound will only enhance condition-monitoring efforts already in use.